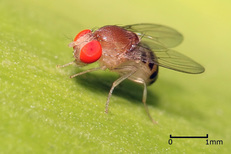 While it might initially strike you as odd to have the latest addition to the University of Oklahoma’s wide array of statues be the mildly unattractive Drosophila melanogaster, upon further examination the common fruit fly has more merits than most are willing to give it. The addition of a human-sized statue of the common fruit fly would further showcase the University’s position as an institution of serious scientific research, a distinction that encourages great minds, both undergraduates and professors, to choose this university as a place at which to study and discover insights about our world. The Drosophila is already highly lauded in the scientific community, so why not have the latest statue be one with symbolism of academic achievement rather than simply a random piece of yet another great athlete?

The species Drosophila melanogaster is a useful model organism for many different reasons. Its relatively short lifecycle of approximately 1 month allows the observation of multiple generations of species with minimal effort. Additionally, since Drosophila only has 4 pairs of homologous chromosomes, it does not have as much genetic diversity as more complex organisms such as mice or zebrafish. This allows any allelic mutations and subsequent phenotypic alterations to be readily observed and documented. Furthermore, since it is simple and small, it is a relatively inexpensive organism to obtain for research purposes, with people even having the ability to capture them simply by leaving out a bowl of decaying bananas. Such a small inconvenience allows researchers to be able to perform a larger amount of experiments since they are not wasting their precious grant money on purchasing research subjects.

Drosophila has been instrumental in the advances in genetics and is still widely used today. Thomas Hunt Morgan began the fruit fly craze by showing that the hereditary material in Drosophila were threadlike structures called chromosomes and that these chromosomes contained genes that could be rearranged and combined in differing ways during reproduction. Without such a simple species to be able to work with, genetic research would not be nearly as extensive as it is today. Moreover, isn’t it time that the animals used in experimentation get recognition by being commemorated in metal rather than the hoards of scientists who have manipulated them?

A statue of Drosophila could even be thought of as relatively endearing once its importance is illustrated. The different forms of various alleles that have been helpful to geneticists could be displayed. For example, one eye could be the wild type eye color of red while the other eye could showcase the mutant genotype allele of white.

Okay, maybe a statue should err more towards the size of 4 feet tall rather than 6, but would it really be as strange as some of the other statues found on campus such as the odd winged human located near the Fred Jones Museum? At least with the addition of a statue of Drosophila it would have concrete symbolism of the power of experimental research.