I believe a human sized statue of Drosophila melanogaster would be a great addition to the university. I propose that it be the first in a series of statues of biological organisms. Drosophila melanogaster, more commonly known as the fruit fly, has been instrumental in the study of genetics, and I think a statue in the commemoration of its use would be a valuable asset to the university.

The University of Oklahoma is known for many great things. Among them are excellent staff, superb athletics, and cutting edge research. Statues can be seen throughout the university campus of statues celebrating important staff members such as George Lynn Cross, and there are a plethora of statues commemorating athletes who have shared their talent with the university. However, there is a distinct lack of celebration of the science that has occurred at the university.

It would be easy to just make a statue about a scientific mind that has made discoveries while at the university. People such as Dr. Nicholas, who discovered a chemical reaction and has it named after him, certainly deserve such an honor.  Though individuals are celebrated in science just as they are in athletics, the spirit of scientific thought is that of collective effort to learn about a new phenomenon. Therefore, I propose that instead of creating a statue of Gregor Mendel, who is known as the father of modern genetics, or Dr. James Thompson, who has been doing genetic research at the university for many years, we should remember the importance of organisms that helped to give the scientific community a tremendous insight into genetic research. The creation of a statue of Drosophila melanogaster speaks to the universal nature of genetic research. Scientists are all working together with similar tools to understand the foundation of life.

With only four pairs of chromosomes and the average life cycle of only a month, the common fruit fly is perfect organism to study the bases of genetics. Thomas Hunt Morgan studied them for many years in what was known as his fly room. Even with primitive equipment, he was able to effectively study the heritability of traits. He manipulated the genome of fruit flies through physical, chemical, and radiological means. Through the use of the fruit fly, Morgan was able to conclude that genes are located on chromosomes and are the basis of heredity. Fruit flies were integral to the initial understanding of heredity, and they are still common model organisms. Their use has been significant in the study of Alzheimer’s disease, Huntington’s disease, and numerous other genetic conditions.  Due to their initial importance in the understanding of genetics and their continued use in the field, I think a statue of Drosophila melanogaster would be an excellent honoree at the university. 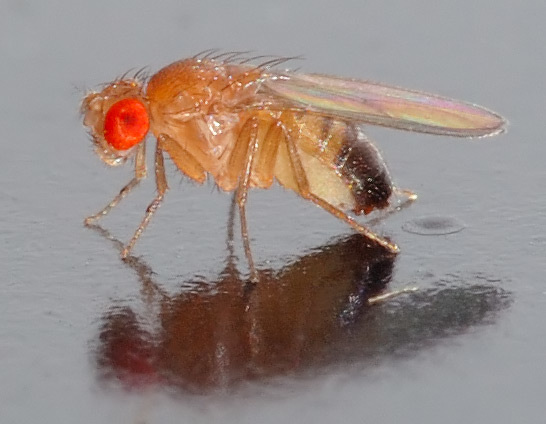