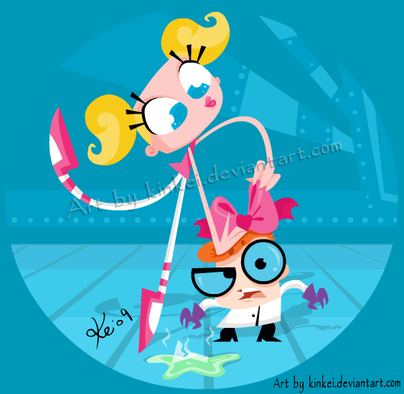 Fan art: Dee Dee annoys her little brother by fixing a big pink bow on top of his head, causing him to drop his Erlenmeyer flask and spill the chemicals inside

When I was a kid one of my favorite shows to watch on Cartoon Network was Dexter’s Laboratory, probably because of my natural interest in science.  This series ran for four seasons between 1996 and 2003, and so it really was a cartoon of my time (and not one I just watched because of my brother who is six years younger).  That being said, even though I was under the age of 9 when Dexter’s Laboratory aired its final season, I actually remember thinking about the gender dynamics of the show.  Something always struck me when I saw that Dexter and his nemesis were obviously guys who did guy things while performing science (which I have always LOVED), and Dee Dee was a “dumb blonde” who liked girly things like unicorns and makeup (which I also love… well, maybe not the unicorns) and messing up her brother’s science.  I see now that I was a very intuitive little kid.  Looking at it today, as an adult, it is rather easy to find mildly shocking gender biases.  For example, the description of season one on iTunes describes the season as one in which Dexter “concocts a plan to give Dee Dee (his sister) a better brain.” Now I do not actually remember how all of this goes down, but two ideas can be drawn from that description.  One is a comparison between the names of the two siblings: Dexter vs. Dee Dee.  You can almost guess the IQ’s of the people with those names, with “Dee Dee” being a very silly, less-intelligent-sounding name and “Dexter” sounding more fit for a scientist.  Another idea that I get from that description is that Dee Dee’s brain is somehow, at the very least, not as good as her brother’s (and at the most, just not a good brain).  One might think this is meaningless, assuming that Dee Dee is a normal person and Dexter is a genius, but throughout the show Dee Dee definitely takes on the persona of a dumb blonde, dumber than the average person.  For example, I recall in one episode Dexter warns Dee Dee to not press a huge red button that says “do not press,” yet she is very confused and does it anyway.  Plus, Dee Dee is older than Dexter! Her little brother is creating a better brain for her? Yeah, okay.
Another discrepancy that is easy to identify in the show is how commonplace it is for Dee Dee to make friends with animals or made-up creatures, such as the Sasquatch and a turtle, or even her stuffed teddy bear.  Dexter, on the other hand, interacts with these creatures differently – the teddy is a distraction from his work, the turtle is an opportunity to make a “biotic powerhouse”, and the Sasquatch is a way to the fame of discovery. Can you see the differences in the relationships?  With Dee Dee they are all emotional, and with Dexter they are scientific even though he is younger.  It really gives you an idea of the complexity of each character’s thinking.
There are so many examples throughout the seasons of gender discrepancies.  It makes me wonder what kind of impact shows like Dexter’s Lab had on me as I grew from childhood into adolescence.  Is it why I have never expressed an interest in research?  Is it, in addition to other societal conditioning, a reason I loved to make bracelets instead of paper mâché volcanoes? Unfortunately I will probably never know the affect these kinds of shows had on me.  However, using this knowledge of gender roles in cartoons, I feel that I will be able to help my own kids avoid them while they are growing up.  It might take some tedious research, and maybe even some fieldwork (watching the shows myself), but I am determined to help my own daughter’s interest in STEM fields thrive if she ever expresses such an interest.  I would not want my child watching a show like Dexter’s Lab, because I think it teaches poor gender roles than need to a broken – even if it is funny and entertaining.  As a parent I want to do everything to harness my child’s interests, and I want to shield them from discouragement as much as I possibly can.