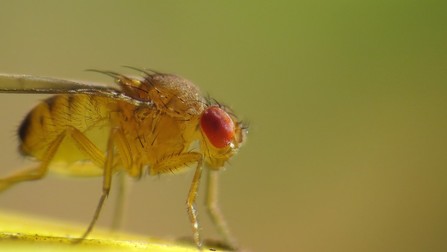 ​Dear President Boren:
In order to celebrate the history of science here at The University of Oklahoma, I think it is absolutely necessary to erect a statue of drosophilia melanogaster (also known as the fruit fly) on campus. The main reason why I believe there needs to be a statue of the fruit fly on campus grounds is because the fruit fly has been a key player in the advancement of evolutionary biology, genetics, and developmental biology during the past century. Also, the fruit fly has suffered much in terms of experimentation over the years. Much of what we known in genetics comes from what we learned from studies and experiments with the fruit fly. One example of a prominent discovery is told to us in Martin Brookes’ book, Fly: The Unsung Hero of 20th Century Science, which is the discovery of the P element. These P elements are transposable elements or jumping genes and when isolated, they can be injected into the fly and cause changes in its DNA. This proved to be key to molecular biology because changes in the fruit fly’s genetic sequence could now be tracked and recorded. This was quite significant because humans also have transposable elements and changes in fruit flies can be analogous to changes that happen in humans. For this discovery, we have the fruit flies to thank. Another major advancement that fruit flies have given us is better understanding of antioxidants such as vitamin C and vitamin E. Before experimentation with fruit flies, it was not known how exactly antioxidants combated the actions of free oxygen radicals within the living system. Free radical damage can cause faster aging and can also be linked to cancers, Parkinson’s disease, and Alzheimer’s disease. In the early 1990s, it was shown experimentally that fruit flies could be genetically engineered with extra copies of the genes for catalase and superoxide dismutase, which are enzymes that neutralize free radicals. These genetically engineered flies were studied alongside unaltered flies and it was shown that the altered flies ended up living much longer. This particular study showed us the effects of increased levels of antioxidants and gave us the understanding of the mechanisms by which antioxidants combat free radicals. Again this advancement in understanding could not have happened without the fruit fly being the test subject. And this study of free radicals and antioxidants continues to be a major scientific focus to this day. Overall these are only two of many ways in which fruit flies have been instrumental to science as a whole. We have learned so much from our studies with them that they need to be recognized for their service.