With the University of Oklahoma campus being classified as one of the beautiful college campuses in the United States, I have a proposal for helping it maintain that status as well as adding to its already great diversity of statues present throughout the campus. Since OU is classified as a research-oriented university, honoring some of the model organisms used for research by professors here would help recognize some of the pioneering research that has occurred. For example, some of the research conducted by Dr. James Thompson, our beloved genetics professor in the Biology Department, with Drosophila melanogaster has revolutionized studies within the field of genetics. A statue of D. Melanogaster would both honor Dr. Thompson and the model organism. This statue would also help any visitors realize how important D. melanogaster has been to the Biology Department here at OU. It would further help current and future biology majors become inspired to conduct research on the organism.
As far as the appearance of the statue, it must be human size in order to show its importance. It could have painted eyes to exemplify the various phenotypes caused by mutations known to occur in many generations of the fruit fly. One eye could express the wild-type phenotype of a red eye, and the other eye could display the white-eye phenotype caused by a genetic mutation that occurs in the chromosomes. Secondly, the thorax region could display the wing mutations. One wing could demonstrate the wild-type wing and the other could show the shortened or duplicated wing mutations.
Thirdly, the eyes could have legs sticking out of them to show the antennaepodia mutation. All of these mutations are not just for show, but also to give credit for the scientists who came before the time of Dr. Thompson who discovered that these mutations exist. The mutations go on to show that many are due to X-linked chromosomal mutations. Furthermore, in honoring scientists with this statue, one in particular is Hermann Muller. Muller discovered that X-ray radiation exposure can induce mutations in subsequent fly generations. Therefore, showing these mutations on the statue will help honor him. More specifically, with the legs being present in the eyes, this mutation would help honor Heidelberg and Nusslein-Volhard who discovered that homeotic genes also play a rule in mutations. In this case, they determine the locations of the growth of certain body parts. Gregor Mendel will also be honored as his hybridization studies with pea plants are what fruit fly scientists mimicked.
Overall, the fruit fly statue will draw attention all-over campus. The highly respectable model organism will certainly encapsulate the idea that science starts off small and turns into something big. 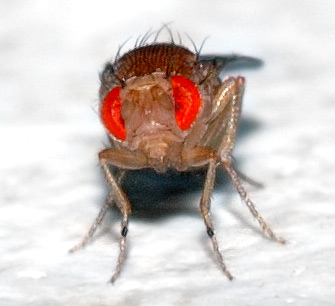 This shows a wild-type fruit fly which is of great interest when introducing or understanding mutations. André Karwath published this photo to Wikimedia and made it public on July 16th, 2005.