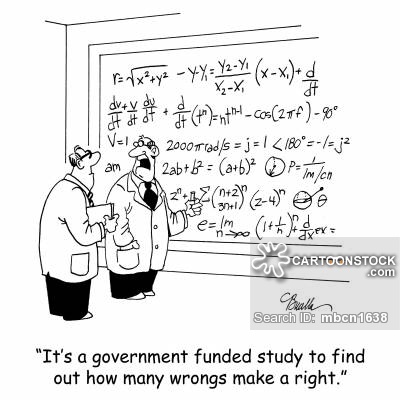 This cartoon exemplifies both humor and science as well as social norms of modern-day society. As many will agree, science consists largely of mathematics. All throughout schooling, math is a concentrated subject for those attempting to undergo a career in science and furthermore, it tends to weed out those who cannot fully grasp it. By illustrating some decently simple trigonometry and extremely basic calculus, the artist is likely just attempting to over saturate the viewers mind with essentially pointless equations and numbers.

The second aspect of this cartoon is the stereotypical scientists represented above. They are, of what appear to be, large, caucasian, dorky men. Both wearing eye glasses and lab coats with very little individuality, these scientists emulate just what society likely envisions when imagining the situation above.

The third aspect ties all the aforementioned components together into a picture-perfect humor situation. Every good cartoon needs a great caption, and this one does quite well at its intended implications. In a discussion about biases that can prove detrimental to the success of science, among religion and politics, funding is also a key interest that may come to mind. Money is what makes the world go ’round, and in the cases of my scientists its what keeps them employed and able to do what they love. However, there can also exist a dark side when stipulations or requirements come along with the science-driving money. If the science will be of particular gain to the funding company, they will be all for it. If the contrary is true, however, the table could very easily be turned. Furthermore, simple knowledge of government funding presents an eerie feeling due to the fact that these previously mentioned pre-existing bias is rather likely to exist, but also difficult to impossible to truly be able to point out or understand their intentions; be they cruel or sincere. However, the government is historically good at messing up, and therefore the joke presents even more humor with the fact that they likely screwed up in science that led them/us (society) to a point that would be acknowledged as a “wrong.” When this occurs it is likely more “wrongs” will be done before the situation is made “right.” The humor is then apparent through the caption, image, and cartoon in general.