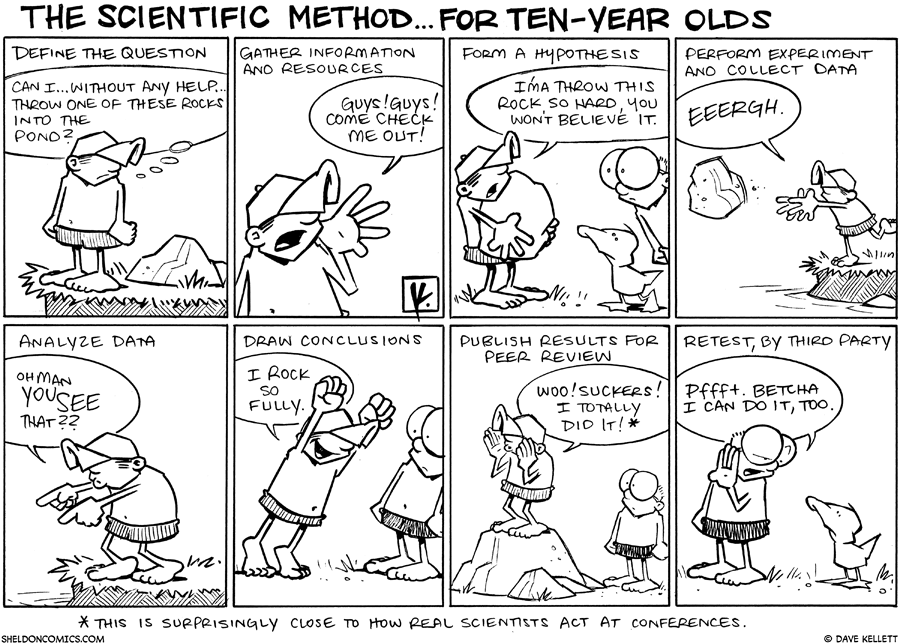 ​After looking through many different cartoon strips with scientific themes, there were a few that stood out to me as funny and enlightening.  A strip from Sheldon comics making light of the scientific method is the strip that I landed on as most entertaining, and the strip can be seen in the picture above.  In the strip, a young boy goes through the a process of deciding to try to throw a rock into a pond to prove that he is strong enough to do it, and the strip jokes that he is going through each step of the scientific process as he is doing it.  In the first step, the boy questions whether or not he is strong enough to successfully throw the rock into the pond, and the strip is labeled as the “Define the Question” step of the scientific method.  The second picture is labeled “Gather Information and Resources” and the boy simply tells his friends to come watch him try to throw it.  The third part is when the boy forms his hypothesis, in which he states that his friends wont believe how hard he is going to throw the rock.  The next picture is when the boy runs his experiment and collects his data by simply throwing the rock.  After he does this, the boy is able to “analyze data” by watching the rock make it to the pond.  In the sixth picture, the boy is able to conclude that he “rocks so fully.”  In the seventh step, the boy takes care of the publishing of the results in a peer review step by simply bragging to everyone that he did it.  The final picture centers on the retest by a third party step, in which his friend states, “Pffft.  Betcha I can do it, too.”  The final part of the strip is that the bottom of the cartoon has an asterisk followed by the statement, “This is surprisingly close to how real scientists act at conferences.”  To me, this final statement is the funniest part and the line that brings the whole strip together.
I thought that this cartoon strip appealed to me and fits in the culture around us because although it is meant to be comical, it demonstrates that everyone goes through the scientific method in countless situations in life.  The funny thing is that even though the young boy surely does not know the formal steps to the scientific method, he is able to execute the steps, and this is something that all of us unconsciously do in situations throughout our lives.  I think that this is a useful strip because often times when students learn about science and try to understand the scientific world, we can complicate things and view aspects of science, such as the scientific method, as more complex than necessary.  Cartoon strips such as this Sheldon strip not only make us laugh, but they also remind us how important it is to keep things as simple as possible and helps us understand that we are partaking in science every day whether we realize it or not.  This strip shows that although us humans may not realize it, we are born with scientific minds that constantly go through steps of the scientific method.