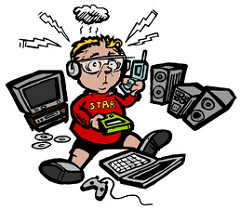 With technology changing everyday, people now have to think are they helping the

government or are they helping terrorists. Technology now days can be use to do anything, we

as people carry around a mini-computer in our pockets. It is not hard to believe everything we

do is done by technology. Companies get government contracts to develop something new to

help them fight the war on terrorism. The terrorist are trying to do the same thing, get the upper

hand on the rest of the world. Think about we as people use a plastic card to pay for items, our

money is a number on a computer screen not physically thing. We get emails that have hidden

messages in it and when you click on a link it instantly hacks your account. As science grows,

so does technology, which is a great thing for the world, but the problem the world is always in a

constant balances so if something good happens, something bad most happen to. Science

brought us computer, so someone had to find a way to corrupt them. In the world presently, we

are at war and its not your normal stand in a line and shoot the bad guys war. We are at war

with technology, before we knew who our enemies were, but now it could be anyone behind a

computer screen. Some of the best computer geniuses can mask who they really are and even

make you think doing something good when your helping terrorist. I have a friend who get pay

to hack different companies just to see how hard their computer security is. With companies

paying people to check the strength of their system, this should tell you that we as people in this

world are vulnerable for an attack.

government out by creating some new software. One of the characters says are we helping the

government or the terrorist his boss tells him to choose whoever pays better. I wish I could

believe that this doesn’t happen in the real world, but I can not. Does companies really care

west? The normal person does not even think about that question, because it does not affect

them, because most people do not care, it does not affect them.