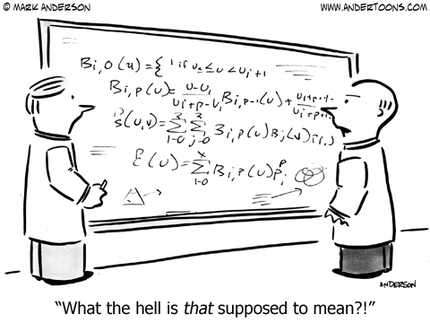 I feel as if this cartoon accurately describes science as a whole. I feel that there is a need to study science. This cartoon is brief and portrays one person asking the other person, “What the hell is that supposed to mean?!” Essentially, this strikes me as one person not understanding the scientific thought process necessary to understand the equations on the board. The state of our modern world is separated between those who study science and those who do not. I am not saying that one is better than the other; however, I am saying that there is a need for people to be studying and doing science. People need to study science because it is necessary for the advancement of civilization and for the prolonging of life. Without science, our modern world would crumble.
I chose this cartoon because I have been in the exact same situation in my classes for my major. A lot of times, we are required to read and critique scientific papers. In theory, this should make us better at writing scientific papers; however, it is difficult because half of the time, I do not fully understand what is happening in the paper. Whenever I come across something I do not understand in a paper, sometimes I ask myself, “What the hell is that supposed to mean?!” This is because I lack complete knowledge in major. Although my professors have prepared me for some parts of the paper, I would need to either perform the science or take a course that studies specific analytical methods in order me to understand what is happening in the papers. I feel that this cartoon is worth sharing because I believe it is relevant across all majors in the sciences. Although we have some training in our areas of study, we do not have complete understanding yet. I also feel that is relevant for those who do not study science. If a non-scientific person were to view a complex equation or read a scientific paper, he/she would mostly ask the same question. This further reiterates the need to study science.
This cartoon also fits into the culture as well. As was discussed in one of TED Talks about antibiotics, we are in a time where antibiotic resistance is a real and dangerous thing. As pathogenic bacteria are capable of multiplying and mutating to become resistant to more and more antibiotics, there is a need for people to be studying sciences to develop new antibiotics. Since it appears that Big Pharma does not want to develop new antibiotics because there is no money in it, there is an even greater need for those who study drugs. I personally believe that the development of new antibiotics is not the way to go. Most antibiotics stop protein synthesis or break the cell wall of the bacteria. There are only so many analogues of antibiotics that could be made before all of the bacteria become resistant to them. Therefore, the utilization of bacteriophage may be the direction for future antibiotics. Bacteriophage are essentially bacteria viruses. This means that they only attack bacteria cells and not human cells. Another interesting thing to note about bacteriophage is that every bacteria has a complementary bacteriophage. This means that when a bacteria mutates, the bacteriophage will also mutate. The need for studying bacteriophages as a new form of antibiotics is crucial to the growing problem that is bacterial antibiotic resistance.