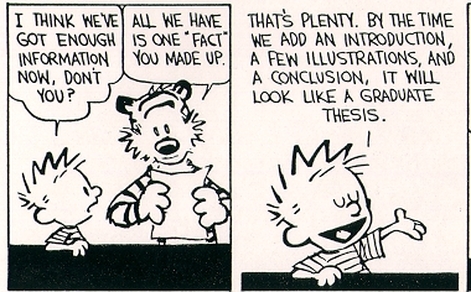 ​          Calvin and Hobbes was a daily newspaper comic strip by cartoonist Bill Waterson for about ten years (1985-1995).  The cartoonist often brought up science and related topics in the strip.  In this strip in particular we see that Calvin gives his opinion of what a graduate thesis is like.  He basically says that is a just a bunch of organized facts that are tightly organized by the structure of the paper.  I find this idea to be very interesting after taking my History of Science class.  It is just absolutely crazy to me how details of history can be left out.  History is only how we record it.  If we fail to tell the truth or speak of a situation correctly, that is that… It still becomes a truth.
Earlier in the class I mentioned my ideas about discovering truth in a blog post.  With any fact or idea that is presented it is important to do research and background work to make sure something is not just blatantly false.  Obviously, it would be impossible to fact check accurately every single thing that we are talk, but it is necessary at times.
I think this cartoon alludes to that idea.  Calvin is pointing fun at graduate thesis by saying they are full of a bunch of “made up” facts.  He compares them to his work as an elementary student.  I think this is more common in science and history (And life in general) than we think.
In history for example it is important to remember there is always two sides to every story.  When examining any type of disagreement in history, it is important to examine what both sides have to say about the issue.  For example, Germany most likely paints a completely different story of Hitler’s reign and World War II than the United States does.  It is important to educate yourself on both sides of any disagreement.
I learned earlier this year that “Survival of the fittest” was not actually an idea or something that Charles Darwin said.  It was actually a term used by Herbert Spencer a contemporary of Charles Darwin.  Darwin knew of this idea but did not create it and never used it much himself.  I had been taught my whole life that it was the foundation behind Charles Darwin’s ideas regarding Natural Selection, but that is simply not true.
Too many times we simply accept things as true without question or further thought.  This is however, probably a byproduct of our educational system.  We are thrown so much in such a short time period it is impossible to question and research every little thing.  Therefore we must pick and choose those things we find most interesting or anything that is alarming.  I wish I would have done that for “Survival of the fittest”.
Bill Waterson touched on a very important idea with his very goof cartoon.  History and truth are often not always as accurate as we may think.