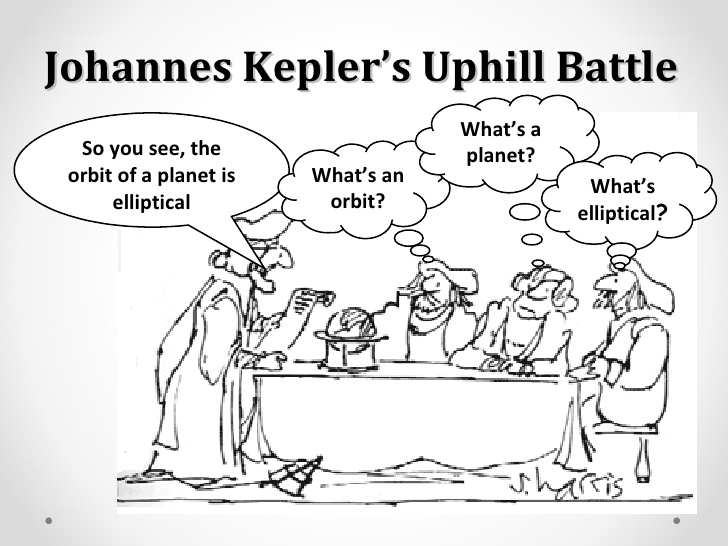 This particular cartoon strikes me as amusing because it addresses the historical fact that scientific authority and political authority are often at odds with one another. The feudal political system of the middle ages repressed scientific progress for several centuries, until the political climate transitioned to the Renaissance age. This battle between the sciences and politics obviously sees different models across the ages and across regions of the world. But in taking a look at the emphasized civilizations and cultures of history, there is a clear power struggle between the worlds of science and politics and it takes some convincing from the scientific community in order to turn theories into laws, or to generally create a new method of thought which would be recognized by the scientific, political and public communities. Kepler was working for and thereby controlled by the government to an extent, so his discoveries were government property and rested in their hands. But certain scientific discoveries are largely due to the funding and control of government, such as America’s production of the atomic bomb. While there are negative connotations of political control over science, there are also positive aspects, considering that certain possibilities and a larger impact could be reached with governmental influence. One could argue a free-market system could permit various forces of privatized scientific corporations, but this doesn’t mean they’re impact would be greater without governmental cooperation in the form of funding and providing a beneficial platform for research. We live in an age now where, unlike the middle ages, science and politics can generally mutually benefit one another. Kepler, being a key figure in the scientific revolution, enjoyed working in a time when the chains of scientific repression were being released, and his impact is as much to do with the time as it does with the political climate. Despite political control, certain scientific discoveries are seemingly destined to impact the world’s understanding of phenomena, as they are that important or radical. Governmental control ay benefit scientific growth or hinder it, but regardless of its function in the scientific community, scientists will always be a driving force in our progress as a civilization.