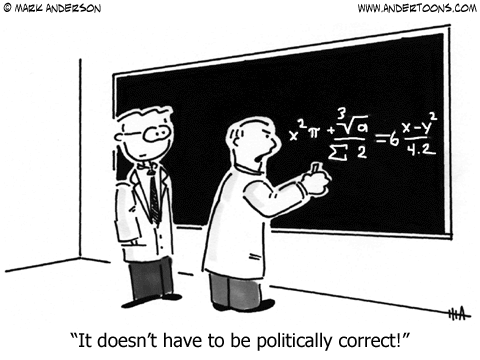 Much like our discussed in the past few sections, some are bound to certain theories and philosophies that are either scientifically unverified or unverified altogether. Some theories, like the theory of evolution, may not be the most popular theory to the general public. That was especially true when the idea gained steam in the 18th century by Charles Darwin. Darwin’s On the Origin of Species book, which focused on natural selection and evolution in biology, the geologist was demonized for his publication.

This cartoon briefly pokes at the notion that some of the theories suggested throughout science are not the most well received. Furthermore, it highlights that science prioritizes facts and evidence that is certifiable rather than speculation. We also see the older scientist conveying this to what happens to be his young apprentice, possibly implying that science’s factual, yet under-appreciated work is something that is inevitably learned or taught as one continues in the field.