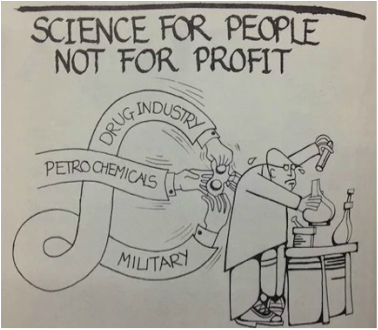 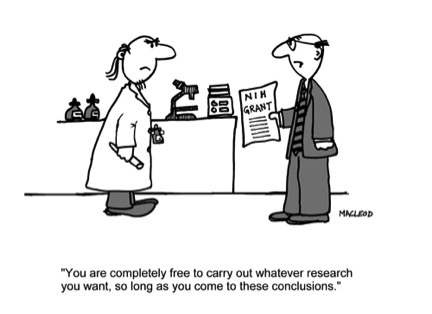 ﻿﻿​These two cartoons demonstrate how current scientific research is pushed into investigating a certain topic. I remember when I was younger thinking that scientists had a question or something they wanted to fix and just worked on that topic I was very incorrect on this front; what research one does is largely determined by what funding one is able to receive, and unfortunately it seems that this kind of problem is dissuading people from pursuing a career in science.

People often want to go into science because they have an innate curiosity about how things work or because they see a problem they want to fix. Unfortunately with how money is allocated through grants, you are very limited to what kind of science you can do.  A scientist cannot just decide to thoroughly investigate something like the circulatory system of a specific group of insects just because he desires to learn more about it. Instead, one must choose to investigate what is “hot” or currently in demand, and the circulatory system of a random group of insects, however interesting it may be to one person, is certainly not going to garner enough interest among other scientists to be deemed worthy of study.

Even if something is deemed important and interesting in the scientific community, it may not be for the reviewers of grants. Scientists could see a certain topic as a pressing issue, but if grant givers do not see it as a problem, they are not going to be able to investigate it. This can be seen in nationally funded research. Although scientists have known for quite some time that antibiotic resistance was going to be a growing problem, politicians either just brushed off their concerns or deemed it not as important to focus their time and energy on as all of the buildings that they are busy renaming after war heroes or the development of a new military weapon. It took until recently for the government to recognize antibiotic resistant bacteria as the serious problem that they are and to develop a plan to combat it.

Though groups who give out grants often claim to be for the science, they are really wishing to gain some kind of profit. This leads them to only funding research projects that will be profitable, and on a large scale this severely limits what research projects one is able to take on. I think it is important to look at where money in science is coming from and see if there is a better system for allocating funds to research projects. If a specific company has funded research and it has specific findings that it wants to come out of the study, though very unethical, it is possible that some scientists would design experiments in such a way that their hypothesis is more likely to be proven true than what is really occurring.

Comic 1 from The Guardian