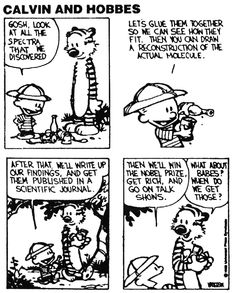 I do not own rights for this image. It was taken from this site. https://s-media-cache-ak0.pinimg.com/236x/d8/3a/3e/d83a3e69350617edccb1e8c28fea8e04.jpg
​I think that this cartoon provides insight (and pokes fun) at the path that most scientists take. It also relays the relationship between the scientist and non-scientist by displaying their different opinions of “rewards”. Calvin, clearly the dedicated scientist, is dreaming about how the process of research goes. He establishes a plan and explains to Hobbes, the non-scientist, the details of said plan. Hobbes response to the expected rewards is pretty funny, because it is not something that we would expect a scientist to get after success in the field. (However, thanks to shows like the Big Bang Theory, “nerds” are seeming to become a more culturally accepted population.)

I also really like this cartoon, because I think it displays the fascination and big dreams that children have about being scientists. I chose this image, 1) I really love Calvin & Hobbes, 2) I love the optimism that Calvin has regarding the real scientific process. With his words, he describes the work ethic that one must have in order to have a successful scientific career.

I think it displays the disposition that scientists (or anyone, for that matter) need to have in order to succeed. It displays that thought is not enough; a plan of action must be had and taken in order to garner results you want.