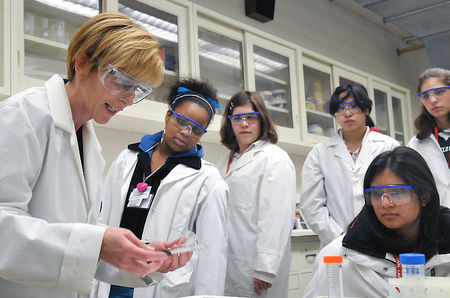 ​After reading “The Subtle Ways Gender Gaps Persist in Science,” I think that a gender gap still exists to a point for women in science in 2016, but the reasons are not noticeable or are not easily seen. For example, Ms. Sugimoto’s study shows us that men are way more likely to publish scientific papers than women. Her studies have also showed that there are less women in science related professorships than men. This data might lead us to believe that there is inequality between men and women. However, I don’t think this data tells the whole story. I might ask the question: What if there are more women who simply don’t want to go into a science related field? If this is true, that what might this say about the field of science itself? Personally, I think that Michele Pezzoni said it best. She said “Everybody finds something. But trying to find an explanation for that is much more difficult.” This means that every time a troubling statistic about women vs. men is evident, we immediately label it as gender bias without even knowing the reason (if there is reason).
Another interesting quote from Ian M. Handley also tells us something important. He said “the idea of implicit bias allows certain scientists to acknowledge that, even if they’re not overtly sexist – telling dirty jokes, or worse – there can still be a problem.” To me, this is saying that we can have bias without even knowing it, and that it is just so subtle. This would probably make sense given that there are still trends about women in science that we cannot explain. But I think that the subtle bias in scientific fields may be left over from the past, when science was very much sexist. And it is still in the process of changing. Perhaps this is a reason why some women don’t want to go into science, because it has historically been set in an unfavorable way for women.
But overall, I think the very idea of bias is the real problem. The author says “bias is pernicious: it can even prevent its effects from being understood.” To me, it’s all a tricky situation and difficult to understand. Personally, I’m in the same camp at David I. Miller, who said “it’s been seen as either pervasive bias against women that is everywhere, or that academic science isn’t sexist. But there’s a whole lot of interesting nuance in between.” It’s all very polarizing, and I think it needs to be looked at in more depth before any definitive conclusions are made.