Scientific discoveries are some of the most amazing things we have. Our society, even if people don’t always realize it, thrives off of scientific discoveries, whether they be in the medical world, the physical world and how heat works or even how gravity works. However, we didn’t come to these conclusions without research and findings to provide the information we needed to piece together the answers. Steps had to be taken, some completely without consequences and some with very dire ones.
In this example branching from the article “The Radium Girls,” it can be seen that some of the worlds greatest discoveries came with mistakes and misunderstandings. There was no first heart surgery without having test subjects to gather data on whether or not it was actually going to work, just like there was no way to discover how truly harmful radioactive elements could be on the human body without first seeing the side effects of exactly what it was doing to the people utilizing the products that were being made from it.
Radium, being one of the few radioactive elements Marie Curie and her husband discovered, not only gave many positive things to the world, including ways to shrink tumors, watches that could be used in the battlefield without giving away anyones position whilst trying to read it in the dark and many more things, however, like I had mentioned before, these things usually come with a price. The women who painted on the radium watch faces that became ever so popular slowly began to become immensely ill. One by one, their teeth fell out, they developed sores, their bones rotted and they quite practically wasted away. This was all thanks to the radioactive activity of the radium that was in these highly demanded watches and people didn’t even realize it. 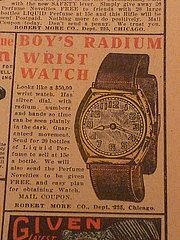