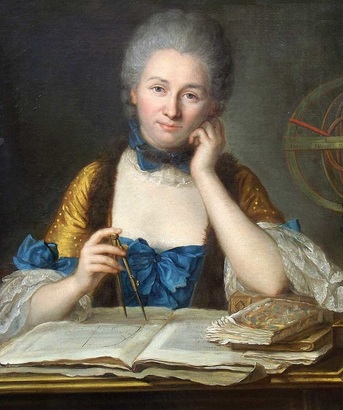 The story of Emilie Du Chatelet is another that shows the disregard of women in science. Her greatest contribution is arguably her translation of Isaac Newton’s Principia, but she is also known for correctly being a proponent of the significance of the mass times the square of the velocity. We now recognize the quantity (1/2)mv^2 as the kinetic energy of an object, but Emilie Du Chatelet lived prior to the establishment of the concept of energy.
Emilie Du Chatelet’s translation of Principia was arguably the greatest achievement of her lifetime. Principia was written in Latin and was hard to read for many people; Du Chatelet’s French translation offered additional commentaries and was the first and only translation for many years. There is no doubt that due to her efforts many French scientists were able to better study Newton’s work and build upon it. Despite this wonderful milestone in scientific history, achievements such as this often get overlooked in the average science curriculum which only adds the prestige of Newton. While Newton’s work was without a doubt revolutionary at the time, it also took many great scientific minds to understand his work in order to popularize his ideas. This happens with every revolutionary idea in science, and , as in the case of Emilie Du Chatelet, those who spread the ideas are shadowed by the person that developed the idea.
Although Emilie Du Chatelet did not develop the calculations behind any terms that we now know as energy, she was an advocate of its significance. Even though we now know her thinking to be correct, this is another issue that is generally overlooked in the average science curriculum. When studying the laws of physics, incorrect views are ignored and instead correct ways of thinking are looked at. Because of this, discussions that lead to the correct establishment of our current laws are overlooked which again diverts more attention to an individual scientist rather than the whole of the scientific community. Emilie Du Chatelet’s story not only shows the even greater gender disparities in science that women face, but her areas of success also highlight issues with how continue to remember and credit certain scientist over others.