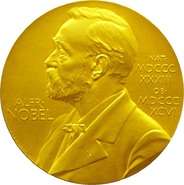 The Nobel Prize acknowledges the efforts of up to three scientists who have made notable contributions to science in the fields of chemistry, medicine, and physics. However, this prevents the recognition of the hard work and sacrifice of other scientists outside of the three who receive the prize. In addition, this allows for some shady stuff to go on during the nomination process, such as ignoring the important work of others.

One such example is the story of Lise Meitner. A physicist in early 1900, Lise Meitner, along with her colleague Otto Hahn, did studies on atomic particles, discorvering several new isotopes and rules of physics, such as the Auger Effect. They began to research splitting uranium, and Meitner realized that when uranium was split into barium, the energy released was equal to the energy contained within one-fifth of a proton, proving Einstein’s E=mc2 equation. Hahn published the work and received a Nobel Prize in 1944, but did not include Meitner as a co-author, stating for the rest of his life that he was sole discovered of fission. Meitner said the Hahn was “simply suppressing the past. I am part of his suppressed past”.

Meitner is not the only scientist who was not credited for their work. In the article “Is the Nobel Prize good for science”, Arturo Casadevall and Ferric C. Fang note the inherent problems and advantages of the current Nobel Prize system. They list numerous instances of controversy among claimants of the prize, with many people either being excluded from recognition, the contribution of their work itself not even being recognized. With only three scientists being able to receive the award at a time, and the funding and fame that it entails, other scientists who have contributed or directly worked with the awarded scientists may be excluded from having their contributions to science recognize. This can lead to people being removed from the work for any number of reasons, such as nationality, gender, ethnicity, or simply because the other three scientists may not have like them.

What is a better option to the current Nobel Prize system? One simple solution is to remove the three person limit of how many people can be recognized for a Nobel Prize at a time, and instead focus on the groups, not the individuals, that contribute to science. There have been whole groups such as CERN which have been recognized for their work, and other previous stipulations of the original Nobel Prize have been reworked, such as a posthumous award. In addition, much of modern science is not performed by individuals, but by groups as a whole, so it makes more sense to honor all the scientists involved, not just a few. The Nobel Prize would still motivate scientists to compete and work towards new discoveries, but instead of pitting all of them against each other, it would actual encourage scientists to work together, share data, and vet ideas against one another in order to have the best possible chance of being a member of a group that wins the Nobel Prize.