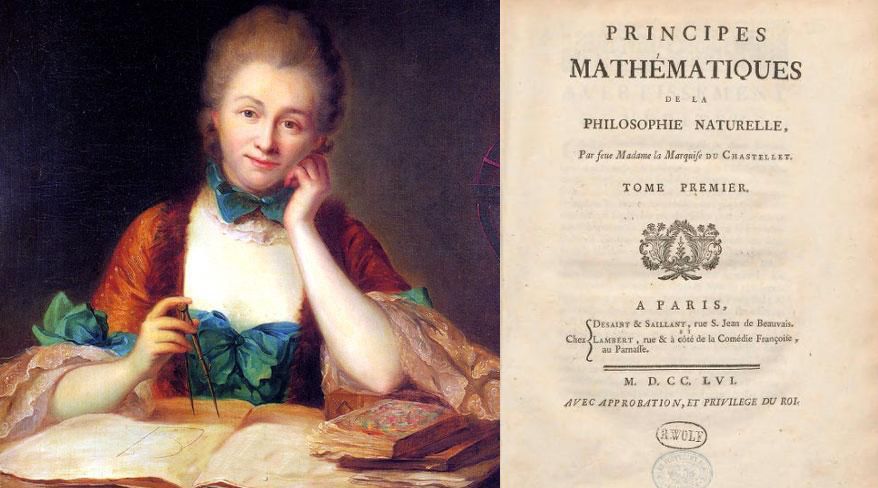 ​Emilie du Chatelet was not only a specialty for her contributions to science as a women, but also as a young person.  She got married young, cared for three children, and still spent her days in the lab working in her passion.  She took great strides, but when she demonstrated her skills she was matched with questions and surprise over the knowledge others did not expect her to have.  She also did not wish to be reserved about her work and her life as Marie Curie had wished.  She wanted to be in the scientific journals and the newspapers just like her fellow male scientists.  She demanded to be recognized as a whole person, someone one the forefront or her research and not riding in the coattails of anyone.
She also did something even more interesting and “rebellious” – she questioned the ideas of Newton himself. Newton believed that the force with which a objects crashes with another one – its energy – could be described as mass its mass times it velocity.  Du Chatelet, however, believed that energy would be mass times velocity squared.  Her challenging Newton was not met with acceptance.  Her ideas were not respected by most of those around her.  However, she was able to prove it experimentally by doubling the velocity of a ball and measuring the distance it travelled.  The relationship is indeed the square of velocity times mass.  But du Chatelet faced the annoyance of the men around her trying to attach themselves to her discovery, and even stop her for the sake of being sensitive to society’s ideas about women in science.  They tried to get her to delay her publishing of her book.  But du Chatelet was not a woman to be tamed.  She published, and was met with insane controversy, especially use to her being a women.  It is sickening to think that people of the time would have considered her a great mind, a great scientist, a great researcher, but not up to the highest of statuses because of her gender.  She was not treated with the respect she deserved as a credible scientist because she was a woman.
But Emilie was not a passive woman.  She was not like Marie Curie, who wished to be quiet and to hide in the shadows.  She was not interested in success for the feeling of being successful.  Instead, she demanded respect and credibility as a scientist.  I like this about her, because I believe that if you want to change a systematic attitude you have to be loud about it. You cannot just sit there, accepting injustice for the convenience of it.  Emilie, to me, was a much more inspirational women because she spoke up, even though was met the same criticism as Marie. While both were incredible scientists who deserved every ounce of respect they earned, but Emilie was the “feminist” of the day – the one who used her voice to change the institution.