Women have always put in work.  We have always contributed to medicine, even though we have not always been doctors.  We have always worked to understand the fundamental laws of our universe, even thought we have not always been physicists.  We have always explored the same issues as men even though we were not granted much authority in professions.  The very first issue of Lady Science notes this, explaining that women have long been influential in female medicine. The erasure came with men’s perceived superiority in the workplace.  Even the specialties of obstetrics and gynecology are portrayed on some television series as men’s stories in which women may be treated as props.  It makes a man think women need him to take care of their reproductive and medical health.

The erasure of women is one of the most frustrating parts about being a woman.  You work hard to earn your doctorate, and you are assumed to be a sidekick nurse.  You are an independent researcher and people question whether or not that is so you can be a stay-at-home mother.  You even start to deliver mail, and all of a sudden you are a mailman, or it is remarked rather dramatically that you are, in fact, a mailwoman! That is not quite erasure, but it is an instance of labeling men as the default and women as the exception, and who wants to be treated as an exception to man – as deviant from the normal human? But women were kind of seen as literal deviants.

When I read Issue 18 of Lady Science, I learned about sexism in the exploration of the supernatural.  I was not surprised to learn that most mediums – or someone who serves as a vessel for channeling the supernatural — are women, because between the tarot readers my mother sought and the television show Long Island Medium, I generally formed that idea myself. What was surprising to me was that psychical research was an actualized science.  I do not think anyone today would think mediums are scientists, but still women became a subject of study.  I was surprised to learn that women were talked over so severely, like as researchers deferred to male spirits over the conscious and aware medium or when mediums lost their authority in their professions by no longer being in control of the entire situation.  Communication with the dead seemed to reinforce the idea that women take, are passive, and are easily influenced. Their authority was undermined.

This concept is not expired; I feel that this attitude is upheld in the workplace today.  Women are talked over, or are afraid to talk due to constant discouragement, and their work loses its credibility. 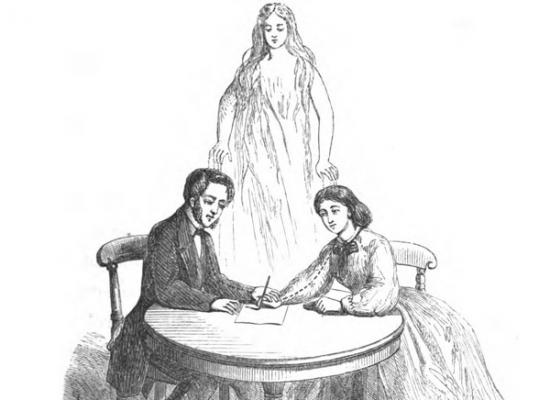