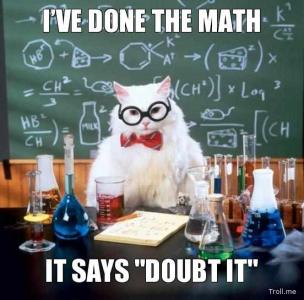 H.C. von Baeyer’s unpublished manuscript would denote enough evidence to suggest he dominates the area of thermodynamics. Although, there is no mathematical explanations in his book, it is difficult to comprehend how could a student devote so much time to the theory and history of thermodynamics without understanding its mathematical concepts and other basic principles of physics. Some might argue that the boy certainly is talented and that he acquires vast knowledge of thermodynamic laws, but his book is just not enough to prove his physics’ skills.
His unpublished manuscript would suggest he possesses knowledge in physics but it does not actually prove it. Physics is not just about understanding the theories; it is about applying them to problems about matter and motion using a mathematical approach. Also, von Baeyer does not address other important areas of physics that are tested on an AP exam, like electromagnetism for example.
That being said, if this seventeen-year-old hands me this unpublished manuscript about the laws of thermodynamics I would have no doubt in believing he is capable of approving an AP physics exam. Nevertheless, rules are rules so if I was scoring committee member I would not give him AP physics credit for his manuscript in lieu of taking the exam. It would not only be unfair to other students, but it would leave uncertainty on whether he can truly apply these concepts to mathematical problems.