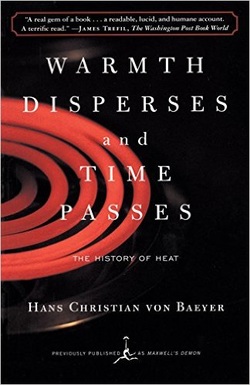 If I was an AP Physics test grader and a student had offered for me to accept their manuscript for their book “Warmth Disperses and Time Passes” instead of taking the physics exam, I would definitely consider it as a viable option. The main reasons why that would be are 1) A young high school student wrote not only his own BOOK, but a book on physics nonetheless. 2) it’s a very good book on the history of thermodynamics and how we came to understand heat and energy.

Now, there would be some issues in regards to the fact that the book doesn’t really show the student’s skills in other aspects of physics, just thermodynamics. Not that knowing the ins and outs of thermodynamics is a BAD thing, but if you’re trying to get college credit for a physics class, you should probably know more than just that. Also, if word got out that a student didn’t have to take the exam, others would deem it as unfair and try to get credit using the same approach. But regardless, I still think that if any high school student came to me with their own manuscript on a specific subject and wanted to use that to replace a credit, I would definitely consider it.

Writing a book is extremely difficult, especially for a young student who has a multitude of other responsibilities. If it was written well, that’s even better. If the young von Baeyer just wrote some nonsense that didn’t make any connection to physics, then of course I would say no. But considering the book is about physics and the intricacies of thermodynamics, it would be hard to reject his proposal. I personally think that the other committee members would possibly change their minds after being given my own personal opinions, but it’s hard to tell. As I said, a lot of them might say it’s unfair and/or doesn’t demonstrate the student’s ability to do well in physics. I think that it not only shows von Baeyers’ thorough comprehension of physics, but also the history of it as well, which is just as important.

​I should also note that a lot of students these days tend to just memorize the equations and how to do the problems in not just physics, but any math based course. I think that learning the why and how is just as important as learning how to solve the problems, because I think it tends to make the subject easier to approach and less “scary”. Basically, what i’m saying is that I would definitely give the young von Baeyer AP physics credit and I would assume that, after reading the material presented, the other scorers would rethink their decision to reject his proposal. As I said, his book is quite good, so if a young kid wrote something like that it would completely blow my mind.