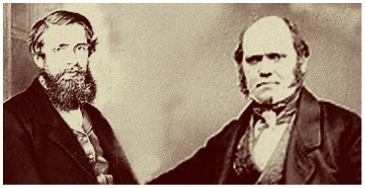 Ever since I first heard about Alfred Russel Wallace in the late 1850s coming upon his own evidence of natural selection (prompting Charles Darwin to finally release his theory of natural selection), it always seemed that Charles Darwin feared Wallace receiving the credit for his life’s work. However, I may have surmised an assumption that was not at all what it seemed. Though Wallace did send Darwin a letter explaining his wondrous thoughts and truly co-discovered the theory of natural selection, Darwin was under no liability to publish Wallace’s evidence. However, this reality did push Darwin to release a joint paper with Wallace and soon after finally released his first edition of On the Origins of Species. The publishing disturbed the “truths” held by many religiously led peoples and created quite a storm. But Wallace and Darwin remained in close contact for decades. And thanks to the Darwin Correspondence Project, we can now analyze over 8,500 of Darwin’s letters.

It’s a misconception to think that Wallace and Darwin were enemies – in fact, they were quite close and exchanged many personal and professional letters throughout their careers.

After overlooking countless letter exchanges between Alfred and Charles, it’s easy to see that they had much respect for each other and were indeed friends, so much so that Wallace actually admitted to Darwin in a sorrowful letter that his fiance had called off their arranged Christmas day marriage. He suffered over this and apparently could not work for six months.

Charles and Alfred discussed everything from variation, sexual reproduction & selection, to evolution and it’s then-hidden secrets. Charles even recommended Wallace for pensions and more notoriety due to his co-discovery of these ideas, It’s interesting to note that many letters even include Wallace encouraging Darwin in his ever-ailing low health and flat esteem due to constant criticism, once saying “Remember the noble army of converts you have made!, & the hosts of the most talented men living who support you wholly.” These two had more of a friendship than I ever thought!

Outside of their personal ties, the brilliant men constantly hashed out ideas and theories with each other. Wallace would send a latter to Darwin about a new observation and Darwin would report back with his opinions on the matter. It’s really a hell-of-a thing that they were in such partnership with each other. I was never educated on how close and mutually respected these two adventurers were. It’s satisfying to know that they were never enemies, but in fact the opposite.