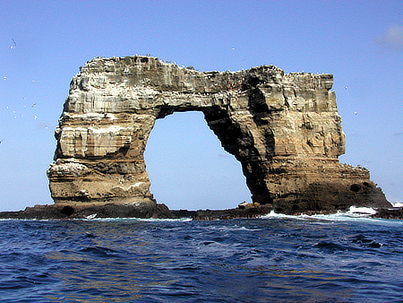 In Letter 740 on the Darwin Correspondence Project, Charles Darwin writes to Joseph Hooker in an attempt to thank him for the grant. He furthers into explaining the expenses involved in publishing something in print. In the second half of the letter, Darwin mentions something that really caught my interest. He writes that in the Flora of Oceania, he observed many different species in different locations that appear to be somewhat similar, yet did not believe that they had been transported from one location to another. It was at this point, I found that he was beginning to develop more ideas about evolution. He also mentioned that in the past, there was probably more land than in his time, which would have allowed land animals to travel between what were now islands. However, after the water levels rose, these animals did not have a way to travel from island to island. This idea is indicative of natural selection. Since each island would have relative differences, the environment would select characteristics of the species that were most advantageous for survival.
Further down in the letter, Darwin discusses about the Galapagos Islands. He said that he did not pay much attention to the vegetation on the islands, but rather, he focused on the different animal species on each of the islands. When Darwin made a reference to the Galapagos Islands, I made an immediate connection to the first time I learned about evolution in high school. When I first learned about evolution, Darwin’s finches were the main focus of the lesson. To provide some background, Darwin’s finches were the species of bird that differed between each other on each island in the Galapagos. Each of the finch species had a difference in beak size according to their location in the Galapagos Islands. The reason for the differences in beak sizes were attributed to the types of food available on each island. On some islands, the bigger beak was more advantageous than a smaller beak and vice-versa. This was the cornerstone of evolution and a major representation of natural selection at its finest.
​In his other observations on the islands, he said that it was more interesting to find close representative species of the same genus than it was to find completely different species. Darwin was more interested in finding animals that belonged to the same genus and wanted to observe the specific differences between the species. As stated above, one of his observations included the Galapagos finches. Darwin’s interest in this observation eventually led him to develop ideas of evolution and natural selection. It was these observations that led him to become known as “the Father of Evolutionary Theory.”
Darwin’s scientific work was not really mentioned in the letter, other than the discussion about the publishing of his science literature or his direct observations on the Galapagos Islands. However, I feel that a good portion of science is having to observe in nature. Darwin made observations that led him to develop a complex theory. The foundation of the scientific method is based on the first step: making an observation. Darwin took the initiative in exploring that observation and that led him to discover great things. Even though Darwin’s exact scientific method was not clearly state in this letter, it was evident that he was performing scientific work on the islands through his observations.