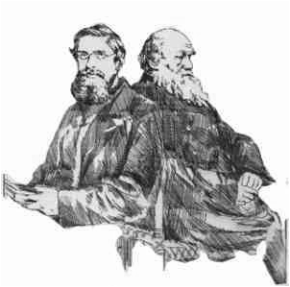 It is rather rare to discover that two individuals of similar nature, with similar beliefs, and furthermore with similar discoveries that would pit one-another in a fierce competition, would entail a result of the closest of friendships. Upon their first contact, through hand written letter of course, Charles Darwin did not take too kindly to the expeditious and pronounced findings of Alfred Wallace. Having generated theories very similar to his own, Darwin found himself fully threatened that his great scheme of evolution could be purloined by the young and unknown Wallace. More so than threatened, Darwin felt defeated and disappointed.

It would have appeared that the brewing of a relationship was in the works; a relationship that would be fueled with contempt and chagrin. However, with enough will, one side of a relationship can cause the proverbial ship to remain afloat in the sea of jagged ice burgs. In this case, it is Wallace’s extraordinarily calm and kind demeanor that may turn an intense rivalry into a keen friendship.

Through the Darwin Correspondence Project, tedious efforts have been put forth in gathering and organizing Darwin’s world; the way he thought and the way he was, all exemplified through thousands of letters between many individuals. There are indeed letters between Darwin and Wallace, of course. These letters prove vital to understanding this interesting relationship. From the initial communications, Wallace was extremely kind and respectful. As a result of this, though many disagreements take place throughout the many years of letters, an endearing, sincere friendship is constructed. Two particular letters, written in March of 1871, give rise to a particular apprehension of their friendship. Wallace writes Darwin discussing his enthusiasm in Darwin’s recent work, business of the review to the “Academy” of Darwin’s Origin, and some leisurely information about his new property. ​However, the most striking words, for this discussion, come in the departing salutations. Wallace, concluding his thoughts, writes: “Believe me Dear Darwin | Yours very faithfully.”

In Darwin’s response, an immense amount of respect and adoration is reciprocated. This wasn’t the case initially, as it seemed respect was rather unrequited. Nonetheless, it is apparent now that Darwin and Wallace have developed quite the relationship. The science in their discussion is interesting, (especially for Darwin since he was correct on the particular topic of sexual selection leading to color) but equally as interesting is Darwin’s farewell: “My dear Wallace | yours ever very sincerely.” Today, it would be baffling to see two men, in any relationship short of a sexually driven emotional bond, or love, bid adieu to one-another which such specifically intimate terminologies. If the Linaean Society, for some reason, years earlier, had chosen Wallace as the recipient of credit on natural selection, it seems highly unlikely that such a friendship ever would have begun. Due to Darwin’s self imposed need to be right, (as he admits in his aforementioned letter to Wallace, “but I fear that the latter are almost stereotyped in my mind”) and his lack of open acceptance, history could have seen quite a harsh turn in the expressions of these two individuals. Fortunately, Wallace was always the kindest of sirs, and for that, a beautiful ending to the story was written.