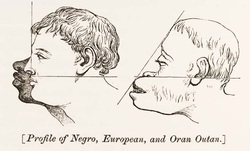 Race and gender are two sources of conflict that spread wide across both human history and humanity as it currently stands. The authors featured in the Enlightenment “newspaper” that speak about race and gender are applying a super simplified type of scientific inquiry in an apparent effort to reinforce the prejudices they already have.  I seriously doubt that this is due to a lack of knowledge of how real science works, since there are tinges of systematic approaches seen in pieces like Emmanuel Kant’s “Observations on the Feeling of the Beautiful and Sublime” and David Hume’s “Of National Characters”.  These authors use words such as “observations” and “ naturally” (here meaning intrinsically), both of which are apparently scientific terms.  However, these people are just speaking on very broad observations.  They lack the fundamental aspects of valid science such as control groups, repeatability, and even biological data which we today know to be much more relevant than phenotypes.  In addition, they are completely ignoring the possibility of their observations being a direct result of nurture rather than nature.
This is not to say that people today do not make the same kinds of general assumptions…  Have we not all heard statements such as “men are so rash” and “women are too emotional to hold public office”?  These are parallels to thought processes in the eighteenth century like those found in the Enlightenment newspaper.  Much of this has been disproved via biological data, experiments, and long-term studies, but between the absolute pseudo-science of deducing based on observation and actual vigorous research was a period in which people tried to tie the two together. This is what I believe probably happened in the nineteenth century.
As evolutionary theory developed, things like religion and societal expectations interfered with the work of those who were interested in the truth such as Darwin. As he defied the church in his study of natural selection, and as other scientists refuted the racist and sexist claims like those in the newspaper, retaliation agianst the emerging information that went against these deep-set views may have become pretty inescapable. False scientific data like that proposed by Carolus Linnaeus probably became pretty standard practice.  For example, have you ever heard that certain races have smaller heads, and therefore other races are superior with their larger brains? Or that African Americans are more barbaric because their skulls more closely resemble the skulls of orangutans? These explanations – really just smart-sounding arguments founded within a bias – are very common.  Humans tend to look for details that reinforce their ideas or opinions, as we all know.  So in an effort to protect their unwillingness to change, and to combat those like Darwin who were forcing them to change, people would theoretically write up their prejudices under the guise of actual research.  And given their prevalence, especially in the wealthier areas where science was possible to study, these people were probably heavily influential.  I fear it is likely that those who felt superior were talked up by these people, and perhaps even that some internalization occurred in women and colored people. Luckily, actual science seems to always prevail. They had no chance!