Man and woman. Different races. The thinkers of the 18th-century had begun categorizing people prior to the development of evolutionary theory through “observation” of differences. Through “observations”, white men at the time began rationalizing that biologically, socially, and culturally, women and those of other races were inferior to them as humans. However, in the 19th-century, “observations” between species of plants and animals narrowed the gap that once separated humans from other organisms.

How did women become subservient to men in society? Privileged men began assigning roles between genders by emphasizing that man is “active and strong” while women were “passive and weak”. These men were known as philosophers, intelligent gentlemen, and thinkers of their generation. It was inconceivable to them that women could be in the same sphere as them, possess the same roles, and achieve the same educational satisfaction. As the enlightened men, the majority of people accepted their views as truth that women and men exist for different reasons: men to be free and the intellects while women to be docile and modest. To men, women’s roles were to serve and support them as they are allowed to be free by God while women were restrained. It became the norm of society that women must behave a certain way or face the consequences of being deviant.  While most at the time agreed with this sentiment, few opposed of this thinking. Marquis de Condorcet was adamant that women were just as capable as regular men because he felt like women and men were equals  as they both are capable of “acquiring moral ideas and of reasoning upon them”. Many advocated that women were unable to reach the full mental capacity as men, but de Condorcet protested that women were never given the opportunity.

Not only did white men lower women down in status, but also viewed those of other races to also be inferior to them. Rather than see all other cultures as equal to their own, they view those that are different from theirs as inferior and their own as superior to the rest. In their arrogance, these thinkers refuse to believe the people of other races to be capable of what they view to be “proper” art and science even though other races have different methods of expressing art and science. By foolishly degrading others, they themselves now seem silly in modern times.

For a long time in history white men dominated politics, business, education, and other pursuits. They felt that that God had designated them as the superior being on Earth that must lead and command everyone else. By citing God as their reason, barely anyone dared to oppose their reasoning in fear of being excommunicated and shamed in their community. It is interesting looking back now at how different society functioned and how the intellectuals of the time created these barriers for women and people of other races. It’s weird to think that these men were probably thinking that by categorizing humans through observations they were doing science in accordance to Aristotle who emphasized that science must be observed. But in the same vein, through observations of biological differences and behaviors, evolutionist managed to develop theories of how species of plants and animals diverged from common ancestors. Although their practice of designating women and people of other races as inferior was draconian, their methods of observation among species encouraged the now known connection among all life beings on the tree of life. 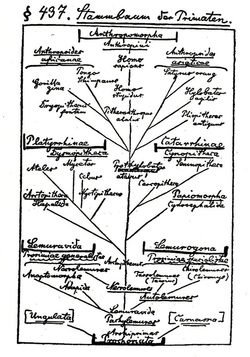 The first sketch of Haeckel’s Tree of Life Link: https://commons.wikimedia.org/wiki/Category:Phylogenetic_tree_of_life_by_Ernst_Haeckel#/media/File:Ernst_Haeckel_-_Tree_of_Life.jpg