​Before reading this blog open up your mind to the way things were back in the 1700s. Carolus Linnaeus published a paper called The System of Nature in 1735. Within this paper he includes descriptions of four different races. All HOMO sapiens but varying by education and situation

Think about an article like this with these descriptions published in today’s society. There would be riots, book burnings, and Linnaeus would receive a mass amount of threats. Its clearly obvious these descriptions were written with bias and prejudice and possibly in order of high society to slavery.
Americans being at the top, being put together, providing many scientist, philosophers, political figures, put together, receiving an education, growing up in top schools from families with money.
Europeans below Americans but he uses the word inventive, which would fit perfectly in this time. Many inventions were coming from Europe such as the steam engine and the thermometer.
What’s interesting is that in neither of the descriptions of Americans or Europeans does he mention negative characteristics. I wonder what this list would of looked like if it was written from the perspective of an African man who was sold into slavery.
African written at the bottom of course, because during this time that’s how they were viewed. Africans made up a majority of the slaves, and were just viewed as property. The harder they worked the more they were worth; if they couldn’t work they had no monetary value and were no longer wanted. 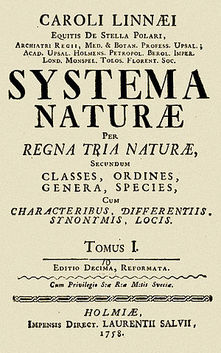 This image is the cover of The System of Nature, from WIKIPEDIA. https://en.wikipedia.org/wiki/Systema_Naturae#/media/File:Linnaeus1758-title-page.jpg
This work is in the public domain in its country of origin and other countries and areas where the copyright term is the author’s life plus 100 years or less.